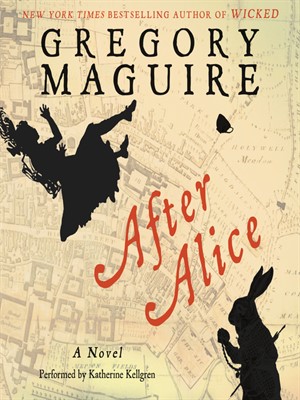 After Alice is a Gregory Maguire novel. He’s the guy who wrote Wicked, the novel that tells the Wizard of Oz story from the perspective of the so-called wicked witch of the west.
After Alice is, obviously, a spin on the Alice in Wonderland novel(s). To me the title has a double meaning, and the book, in fact, tells two separate stories. What was going on with everyone else- friends, family, neighbors, acquaintances- after Alice fell down that rabbit hole? The reader is also introduced to Ada, the little girl who also somehow falls down into Wonderland (although it is never called that) sometime after Alice had already descended. Once down there, Ada comes to the conclusion that maybe this strange place is where Alice has disappeared to and decides to go after Alice, to find her and bring her back home, if she can.
So, that’s a brief synopsis.
Now, my first thoughts and impressions of After Alice. . .

Big words. This is why I think Gregory Maguire writes- to use big, obscure words that most people have never heard of, let alone understand.

Yes, I actually wrote them all down. As I was reading After Alice I became so fascinated by the incredible amount of unfamiliar words and phrases that I felt compelled to start making a list. What I listed above is only part of what I recorded on paper here at home, and includes only up to chapter 7!
Now, to be honest, I haven’t done any research on Maguire at all, so maybe there is an article or something out there that explains why he writes using such obscure language. With that said, I think one possible explanation as to why he uses such strange words in After Alice is that he is writing for the time period in which the story is set. Just a theory…

However, on the back of the book jacket of After Alice there is a quote from the Los Angeles Times regarding Wicked which describes that novel as “A staggering feet of wordcraft. . . .”

Exactly. Wordcraft. The words come first. The story- the tale being told- is secondary. It takes a lot of patience, perseverance, and determination for me to read a Gregory Maguire novel. And I state this unequivocally despite the fact that I’ve read only 1 and 1/2 books by him. A few years ago I read Wicked. It was difficult, but I did finish it. (I also saw the play. The play is much better.) And, a bit challenging though it may be, I WILL finish After Alice. I am, as I’ve said, determined. I will conquer it. That’s why I stuck with and ultimately finished Wicked even though it took me forever to get into it, and it’s why I will do the same with After Alice- TO CONQUER IT, to beat it, to win! I can’t let the book win!
This is a new sensation for me.
I’ve never read any book to “beat” it. I read books that I actually like, books that are fun and interesting with characters and stories that I love, relate to, and learn from. I read books to relax, I read books because I enjoy them- not to conquer or beat them as though reading is some sort of battle or struggle between book and reader. Or reader and author.

At this point (Sunday June 26th, 2016, approximately 1:00 am) I am a little more than half way through After Alice. It took several chapters but I finally understood what was going on, and now that I’m getting close to finishing the book I can say that the story– once the author finally gets to it- is actually pretty good and interesting. It’s also, from what I can remember, much easier to follow than Wicked.
I was just talking to my mother-in-law about this today (well, yesterday, technically.) She’s the one, as I mentioned in a previous post, who gave me her copy of After Alice. She’s  read Wicked as well, and we (along with several other readers we know) share the same sentiments regarding Gregory Maguire’s unusual writing style. We don’t care for his style of storytelling, but he is a good writer. The following are some of my favorite quotes (so far) from After Alice.

“Depending upon the hour, a governess in a troubled household is either a ministering angel or an ambulatory munitions device.”

“Ada, not a deeply imaginative child, believed the cows were resistant to conversation.”

“But she was a good girl. On the way out, she slammed the sewing room door only a little.”

“Miss Armstrong was aware that imagination, often a cause of temptation and unrest, could also serve the soul. . .”

“Miss Armstrong sometimes tried to communicate her yearning for recognition as a feminine entity by the tilting of an eyebrow. This was too obscure a hieroglyphic for the Vicar to decipher, no matter how Miss Armstrong concentrated the pure fire of her being in the muscles of her forehead. One day she would self-immolate . . . . Spontaneous combustion caused by an eyebrow left to smolder a moment too long.”

“The world pauses for royalty and deformity alike, and sometimes one can’t tell the difference.”

“She’d stood there for sometime, poking the pyre of coals so that no evidence of her own corruption survived. . .”

“Up until ten minutes ago, Ada had not had much experience in the practice of imagination.”

“She’d have to take up a hobby of some sort if she were to fall for eternity.”

“Her gait was still lopsided, but so was the world, so she kept on.”

“No one can ever know the answer to that question. It is existentially, hyperbolically, quintessentially unknowable.”

“Evolution a mighty power, could it yield up creatures capable of argument.”

3 thoughts on “Review: My first impressions of After Alice”